The Sun Ra Arkestra Directed by Marshall Allen is pleased to announce that it will open for Solange’s Orion’s Rise tour doing four dates running from September 28 through October 3 with concerts at the Orpheum Theatre in Boston, the Kennedy Center in Washington, D.C. and with two dates at the Radio City Music Hall in New York City.

The previously announced manifestations of the Sun Ra Arkestra where it launches and headlines the first night of the inaugural October Revolution Festival in Philadelphia, PA on October 5 and headlines at the BRIC Jazz Festival in Brooklyn, NY on October 19 remain among the highlights of the Sun Ra Arkestra’s 2017 World Tour. The Arkestra also looks forward to its return visitation to the Staten Island Jazz Festival’s 30th edition on October 21.

It is also exciting that the Sun Ra Arkestra Directed by Marshall Allen will be doing its third 2017 European Tour from October 27 through November 11, with the band covering eleven performances in Italy, England, Turkey, Switzerland, Greece, and Germany. Please note that all three Arkestra shows during its 12th Cafe Oto residency in London on October 30 – 31 and November 1 are completely sold out.

Marshall Allen, as Musical Director of the Arkestra, is now in his 59th year of continuous activity within the Sun Ra Arkestra. Marshall has been in the Arkestra 22 years longer than Sun Ra himself, as he continues moving forward at light speed while the Arkestra travels the spaceways.

The current concert itinerary of the Sun Ra Arkestra Directed by Marshall Allen is: 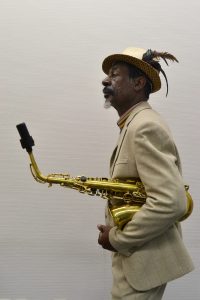 Proud to represent Knoel Scott and the KSQ

Knoel is one of the original members of the famous Sun Ra Arkestra and his new Jazz Quartet (KSQ) features Charles Stacey on Piano, Mikele Montolli on Bass and Shane Forbes on Drums.